Another Katrina? Oh, just an NAACP debate. Plans were the same anyway. 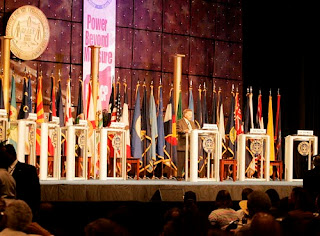 Looks like Republicans aren't showing up for anything these days.

On Thursday, all but one candidate failed to attend the NAACP's Republican debate. Still, organizers were sure to put podiums up for the "missing" candidates. The lone attendee? Tom Tancredo, a Congressman from Ohio. Before you give him a standing O for showing up like the crowd reportedly did (our crowds? not so sure), it's best to read the nonsense he was trying to perpetuate.

Check out this report from MSNBC:

"Tancredo said proponents of immigration reform have 'the audacity to call 'amnesty' the modern day civil rights movement.' He earned big applause for saying 'There is no comparison' between the two movements. Is he banking on black Americans' concern over jobs lost to illegals trumping the elements of common experience between the Hispanic and black communities? And is he trying to play on the tensions between some blacks and Hispanics highlighted in cities like Los Angeles and Houston?

He then closed with a two-minute statement, including an anecdote highlighting what he said whites and blacks have in common -- a language.

He recalled the story of a white woman looking for crew socks in a store and could not find anyone who spoke english. She finally found a black woman who helped her. The black woman said, 'I always knew something was going to bring us together. Who would have thought it was going to be a language?'" [MSNBC]

That closing anecdote is particularly insidious given the larger context. More neocon nonsense trying to tear black and brown communities apart. I'm really disappointed people fell for this, but the rhetoric is locked tight and seductive. Expect more of this at the Republican All-American Presidential debate where (I've heard) most candidates will appear. As for part two of the Dems debate, I'm working on it.

Back to black and brown tensions regarding immigration. Has anyone seen any good posts on this lately? It seems as if we've dangerously coalesced moral and legal standards with short term economic realities in our politics (oh yeah, and racism). What can we do to sort it out, especially since a number of our potential allies might be tempted to respond to these conservative class-based fear tactics around the immigration issue?

Not rhetorical, btw.
Posted by Joshua at 9:14 PM

Not to nitpick, but Tancredo is from Colorado, not Ohio. Please don't talk unecessary shit on my state. We're Kucinich country.

You could probably guess my perspective on how not to alienate potential allies when the fear mongers start trying to divide and rule on the color lines. Class and race must be addressed simultaneously. The best way to keep us together is to speak in terms of the boogie man that oppresses us all. Of course, class and race have tremendous overlap in our country and that needs to be discussed as well. Let's hear someone talk about why post-industrial capitalism in the U.S. disproportionately affects African and Latin Americans without, as you would say, "pathologizing" those communities. Also, the irony of a white rightist trying to stir up racial phobias in the black community is just too funny. My two cents.

The Women of Color blog (www.brownfemipower.com) is generally good about the links between brown & black women's struggles. The author is Mexican, but she does her homework well and consistently writes about feminism & women of color around the world.