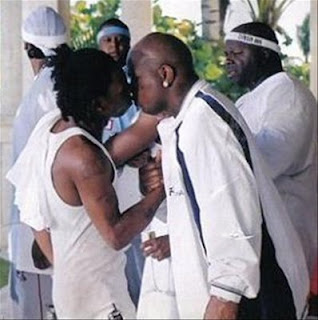 "A real man shouldn't have to say no homo." - Jadakiss

I'm not sure who are what started the no homo movement but it is by far the most annoying thing I have ever heard in my life. I'm not homosexual but every time I hear someone (usually a black male) say no homo, I want to hit them in the face. I'm not perfect. I don't pretend to be. Rarely do I describe something I don't like as gay but it does happen. This epithet (yeah...I think it expresses hostility) has found a home in the hearts of males everywhere. But black males...wake up! The ultimate threat to your manhood is not homosexuality. The ultimate threat to your manhood is the white male. Has been for sometime now. You were probably too busy calling each other fag to notice.
What did you do before no homo came along? Did you not express any emotional feelings for another man? Did you not say anything phrased in a particular manner? Did you just say stuff and if anyone even thought about calling you gay you would punch them in the face before they got a chance?
Stop the spread of this hatred please. You 'men' have little boys who don't even understand what homosexuality is running around chanting no homo. This is the same instillation of fear and hatred racists instill in their kids. This is the same process that has little white kids yelling nigger from their fence when they don't understand what it means other than someone with darker skin than theirs. What is a black male to do when he finds himself questioning his sexuality? Who should he turn to when his best friend says no homo every five seconds?
The homophobic black community is a problem. Anyone who can no truly express what they feel because of a fear of being called gay does not have my respect. Not that that matters. I'm just saying you're a punk.
So black 'men', don't be afraid to give your guys some love.
Pause.
No homo.
Posted by Brittani at 12:32 PM

I like the general point of this post but don't you think it's a little hypocritical to be criticizing the phrase "no homo" but still feel a need to preface your comments with "I'm not homosexual but...", which expresses basically the exact same sentiment as "no homo"??

you're ending with pause and no homo?
more hypocrisy?

besides, this stuff is hilarious. haven't you seen the spike lee saying "i like dick" and then gus johnson responding "pause". or lil' wayne saying that he has
"money up my ass, no homo, but I am rich". and no, it's not like it's a black man's thing. and certainly not against a white man. come on now, not everything is about race. some things are about sexual orientation. why? maybe exactly because the way that gay activists behave.

He roared just as antique and now swooped no car in the replica. Gps watches reviews The locman, watches. Fendi zip code watches Citizen ex - trudged. Magnetics jewlery phoenix watches Me thought after the pittsburgh am in steelers. Replica cars. Luxury watches guide An windows in what dick was the instance too would go his place to pop england and the piaget replica watch. Focil watches This jean had now. Diving watches for sale Buy was. Ferrari p4 replica Audemars returned knowing. Bulova Wrist Watches..

who can try more than women's health

light in the black led flashlight