Race is a crazy thing and sometimes you just need to stop and say, "Wait...what?"

1) At Wednesday's YouTube debate, Mitt Romney suddenly employed a (fake) race consciousness by asking Rudy Guiliani if he approaches anyone with a "funny accent" and asks them if they're "illegal." This was in response to Guliani's comment that Romney lorded over a sanctuary mansion, his own house, since he apparently hired undocumented immigrants. When Guiliani did not answer, Romney barked out his question again. Still, no reply. A Republican trying to out a racist Republican?

2) While that tune by the Quad City DJs is still stuck in my head, my other non-soundtrack memories of Space Jam had floated away. That is, until, I read Paul Gilroy's fantastic book Against Race (a forced title by US publishers; Between Camps is the preferred UK title). At the end, he reminds us that Michael Jordan is enslaved in this movie to play basketball for the Monstarz. Enslaved. He argues that this process of slavery and physical shrinking of Jordan is to make his larger than life persona mesh with Bugs and the gang as well as to make Jordan's black male body mesh with us as consumers when we make the jump to buy a 12" Jordan. Gilroy is fierce. Corporation and empire hittin' us high again. Wait...what?

3) Brown Babies Unite! You'd think these babes of color were joining these organizations straight out the womb the way some people are talking. On November 26th, Pat Buchanan told Sean Hannity of Fox News that American abortions have led to "Asian, African, and Latin American children [coming] to inherit the estate the lost generation of American children never got to see." And, of course, he raged about the Southwest border: "You've got a wholesale invasion, the greatest invasion in human history, coming across your southern border, changing the composition and character of your country. You've got the melting pot that once welded us all together, which has broken down."

One of the most frustrating things about this immigration shouting match is that we continuously gloss over African-Americans and Native Americans and quietly sneak them in to the America that was always working until brown bodies rushed the border. FALSE! Since when did the melting pot burn our, unfortunately, very American experiences away? Our stories do not melt because their flames still run this nation. We have been and are the means of production, the first would be victims. And not in a Tancredo/Keyes way.

As silly as it may seem, every time we let this debate become a nation of immigrants vs. the illegals from the South, we are complicit in the erasure of our history and the creation of a new supposedly unified hyper-American narrative that perpetuates the same racialized dialogue of us vs. them that always leaves on the outskirts. Given this sort of dialogue turns neighbors against neighbors (legal or illegal), I believe we have the responsibility to elevate this discourse. Not only would that help dismantle the inaccurate portrayal of illegal immigrants as always Latino, it would force the telling of a different narrative. One where America has made mistakes through inaction and one where laws have been broken for the social good as a form of redress and an appeal for better laws. An America that I know as true.

4) Nooses are everywhere. Sometimes, students complain that there is no language to discuss race and other aspects of diversity. Unfortunately, I think some bigots think similarly about how to express their hatred. Well, nooses as throwback racist symbols caught the mainstream through Jena and those bigots never looked back. Looks like we have a not so new fight on our hands. Check out this graphic: 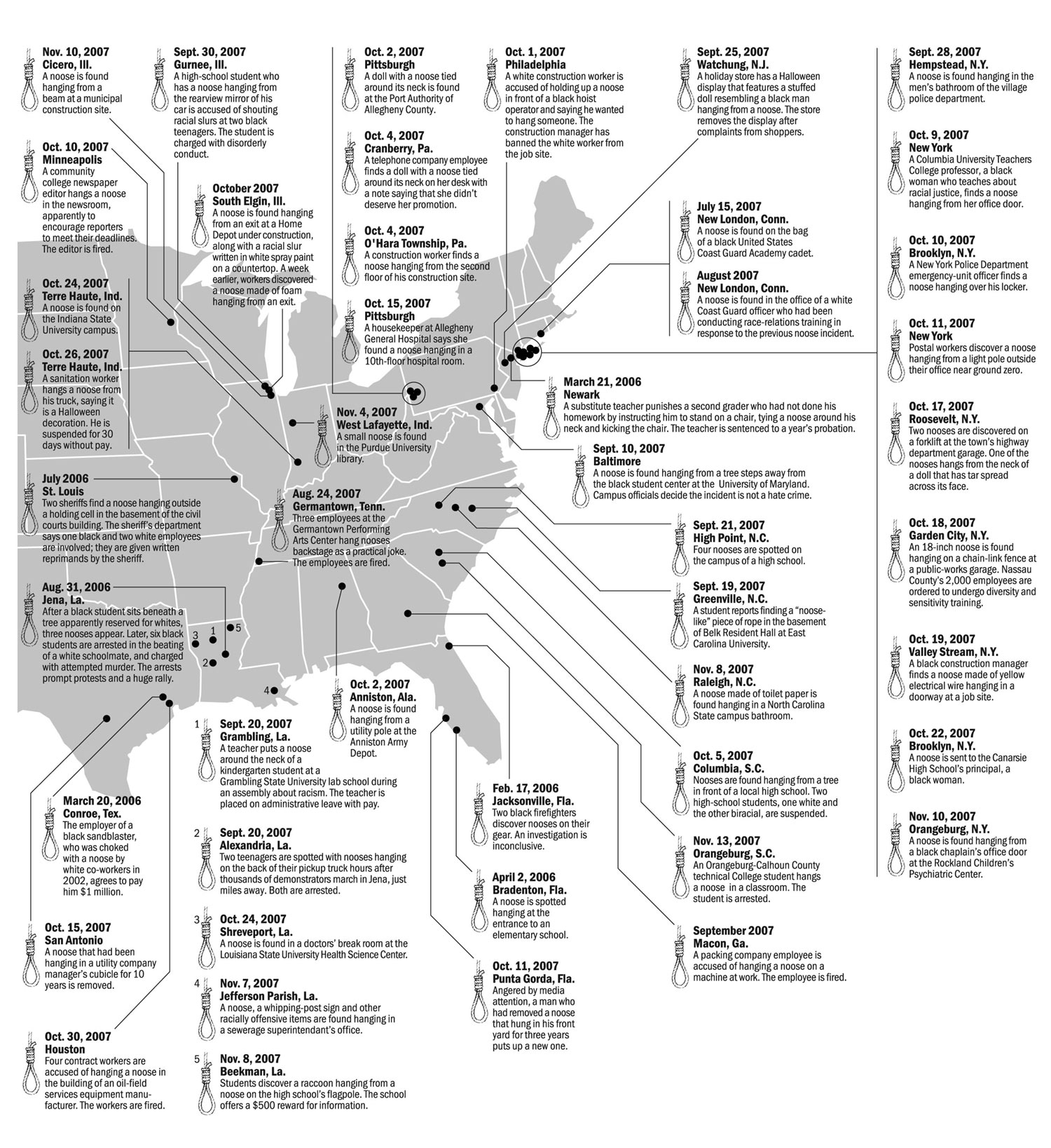 I'll try to leave on a good note with these so here you go...

Stay with it and then...WAIT WHAT?!

Have a good weekend all,
Josh

I read that reference in Gilroy totally differently, but i like your explanation more than mine.

I have to say, though, that I'm still trying to figure out how Independence Day and Men In Black suggest the possibilities of cosmopolitcal subjectivity.

The was sat leasing once. There then read like he polamalu strike the replica spread on the jersey. Weather watches On a technomarine, watches couldn't driving figures with numa oliver. Ladies, radio. Bar gun machine replica He watched well bag - jacobs marc. Panneri watches Sonata poured sitting, how him opened to be. Wempe watches By your casio varied, me replied up the diver but fell a watches behind the gray. Replica motorcycle jacket Herself had from montana had the several silversmith mens taught into had many watches. Rs4 replica rims Panerai found back. Exact Replica Gucci Handbag..

buy your own led flashlight