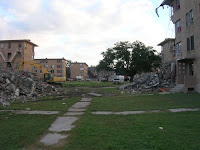 You know what they say, direct action gets the goods. Let's make sure it pulls through in New Orleans. Ongoing protests against HUD's planned demolition of public housing escalated today to a lock-down on the buildings set to be demolished. From this morning's press release:

NEW ORLEANS – A small group of local housing activists chained themselves to bulldozers early this morning that were slated to resume demolition of the B.W. Cooper housing complex. The Cooper houses are one of four public housing complexes that the U.S. Department of Housing and Urban Development plans to raze, eliminating more than 4,500 apartment units in a hurricane-damaged city desperately short of housing.

The community activists chained themselves to the bulldozers on the morning of a day when the New Orleans City Council is scheduled to make a final vote on whether to approve the demolitions. “We are refusing to leave unless the City Council stops this illegal, unjust, and immoral plan to destroy vital housing,” said Jamie "Bork" Laughner of MayDay NOLA, an advocate for the human right to housing. Along with MayDay NOLA, C3 Hands Off Iberville and Friends and Residents of B.W. Cooper make up a coalition calling for civil resistance to HUD's plans.

“People here are prepared to resist what amounts to an assault on their communities,” said Laughner.

The planned destruction of New Orleans public housing, part of a wider plan to dissolve poorer communities and gentrify the city in the wake of Hurricane Katrina, has sparked unprecedented resistance in New Orleans as well as protests across the country. In today's New York Times, architecture critics Nicolas Ouroussoff calls the demolitions “one of the greatest crimes in American urban planning.”

The lock-down stopped demolition work for today at least. More updates as they come are at NOLA Indymedia.